Taste 6 craft Slovenian beers from different regions presented by our Beer Geek
Learn must-know & fun beer facts
Held in a local pub in the centre of Ljubljana
Interactive socializing with a group of like-minded beer enthusiasts
Get your beer questions ready! 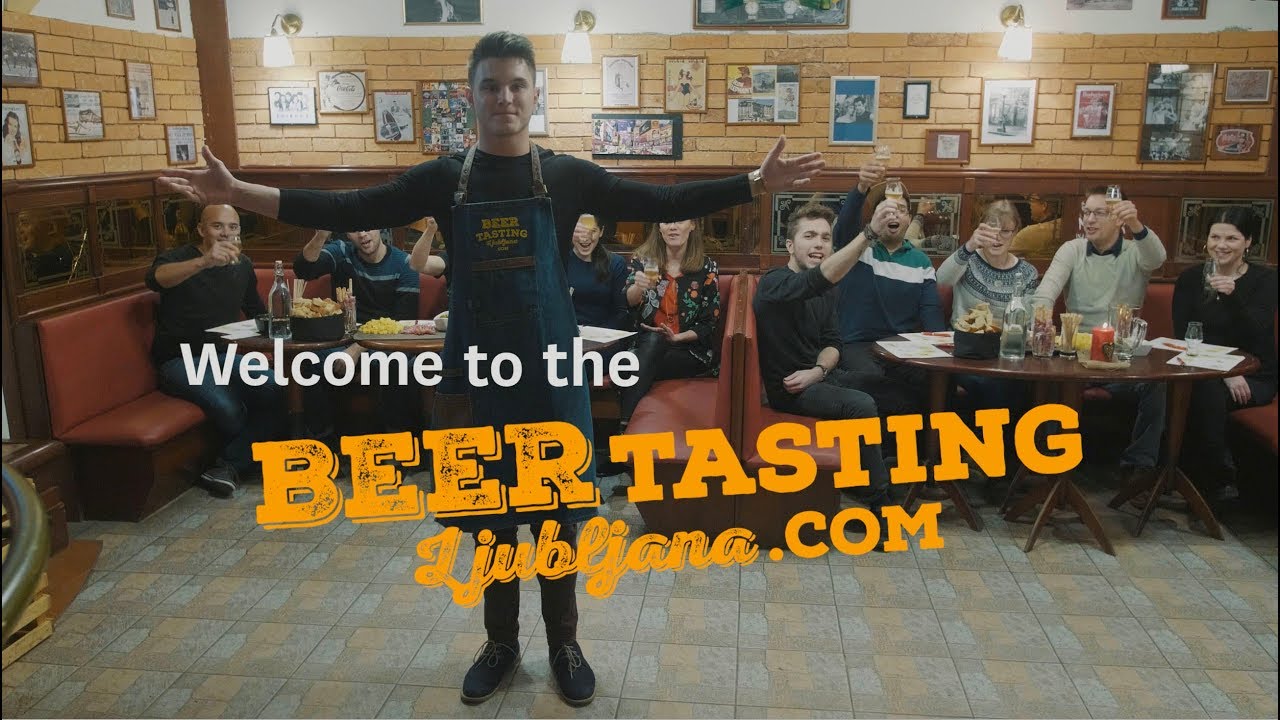 Sign up is required to reserve your spot.
The tasting is conducted in English.
Contact us for private groups.

Beer lovers rejoice! Hop onto our hops express as it pours full foam ahead into the land of Slovenia’s remarkable land of craft beer. Explore our beer tradition to the fullest, hang out with other beer enthusiasts and raise a glass to the future!

Not long ago, Slovenia was a beer battleground that saw two leading distributors fighting over who will supply the final sip. The last decade, however, has witnessed a craft beer revolution. Microbreweries have been springing up like mushrooms after the rain. And their products are amazing!

At this beertastic tasting event, you will experience the exquisite flavours of Slovenia’s top craft breweries. Spoiler alert: these include one of the best craft beers in the world. The beers are from various regions around the country, each crafted under the skilful hands of master brewers who add their special twists in the production of this heavenly beverage.

Mind you, Beer Tasting Ljubljana isn’t just about drinking beer. It involves highly interactive socialising and learning fascinating fun facts about beer as well as trying some delicious snacks which will help sustain you during this lovely two-hour-long ordeal.

You’ll join a group of like-minded beer enthusiasts in a Ljubljana pub and listen to a beer sommelier as he guides you through your tasting adventure. Plenty of fascinating information will be revealed, including local anecdotes, traditions, history, all complemented by a bunch of exciting beer-related activities you won’t easily forget. Unless of course you significantly prolong your beer tasting after the official event is over, which is not an uncommon occurrence.

During the tasting, you will have ample opportunity to ask questions, share opinions, and most importantly have a laugh together as you discover the wide variety of flavours our beer scene has to offer.

No, lager is not the only beer in existence. You’ll taste some IPA, stout as well as sour beer, a perfect refreshment on hot summer days. All that is required is for you to sit back, relax, and sip away till your heart and palate are content.

Let’s get our beer on. Cheers!

There are more than 100 microbreweries in Slovenia which has only 2 million people.
Slovenians drink almost 100l of beer in a year on average.
Slovenia is 7th biggest exporter of hops in the world.
Best German and Czech Lagers are often made from Slovenian hops.
The only beer fountain in the world, which operates from April 1st to the end of October, is in Žalec, a 45 minute drive from Ljubljana.
In Slovenia in small place called Laško, you can challenge yourself in the world’s first escape room about beer brewing.

6 of the best local beers from different beer producing regions of Slovenia.

Anyone who’s interested in getting to know Slovenian beer. Perfect for both novice and expert beer tasters.

The tasting is held in a pub, right in the heart of city centre. If you book it on Wednesday, you can prolong it to Karaoke night 🙂 Good times never stop!

Sašo
Talk to our travel expert
[email protected] + 386 41 541 223
Usually replies within 4 hours!
For individual travelers or last minute booking please contact us.
Travel dates can affect the prices.
The itinerary can always be adjusted to suit your budget better.
Don't miss out
Reserve your spot before it sells out
Covid refund guarantee
Money-back in case of covid restrictions
Instant confirmation
Tickets delivered to your email
Fast and easy booking
Book you activity in few minutes
Guaranteed prices
No additional costs
We care about the planet 🌍 Read more >

Gordon H.
Verified Customer
I went to Ljubljana with a couple of friends and since we didn’t know what to do on a rainy day, we decided to take a beer tasting. There were other participants all lovely people and our beer master Sašo was very easy going and he explained everything we wanted to know about the beers we tasted. We found out that Slovenia really has delicious craft beers! Loved it!

Makoto M.
Verified Customer
Beer tasting is the best way to get to know everything about Slovenian craft beers, which are great and not yet discovered! We were positively surprised with Slovenian brewing culture and we tasted a lot of very interesting beers. I would recommend it to all beer lovers and home brewers.

Arno K.
Verified Customer
This is a very special experience for beer-lovers and people who are interested in craft beer brewing.

This website uses cookies to improve your experience while you navigate through the website. Out of these, the cookies that are categorized as necessary are stored on your browser as they are essential for the working of basic functionalities of the website. We also use third-party cookies that help us analyze and understand how you use this website. These cookies will be stored in your browser only with your consent. You also have the option to opt-out of these cookies. But opting out of some of these cookies may affect your browsing experience.
Necessary Always Enabled
Necessary cookies are absolutely essential for the website to function properly. These cookies ensure basic functionalities and security features of the website, anonymously.
Functional
Functional cookies help to perform certain functionalities like sharing the content of the website on social media platforms, collect feedbacks, and other third-party features.
Performance
Performance cookies are used to understand and analyze the key performance indexes of the website which helps in delivering a better user experience for the visitors.
Analytics
Analytical cookies are used to understand how visitors interact with the website. These cookies help provide information on metrics the number of visitors, bounce rate, traffic source, etc.
Advertisement
Advertisement cookies are used to provide visitors with relevant ads and marketing campaigns. These cookies track visitors across websites and collect information to provide customized ads.
Others
Other uncategorized cookies are those that are being analyzed and have not been classified into a category as yet.
SAVE & ACCEPT